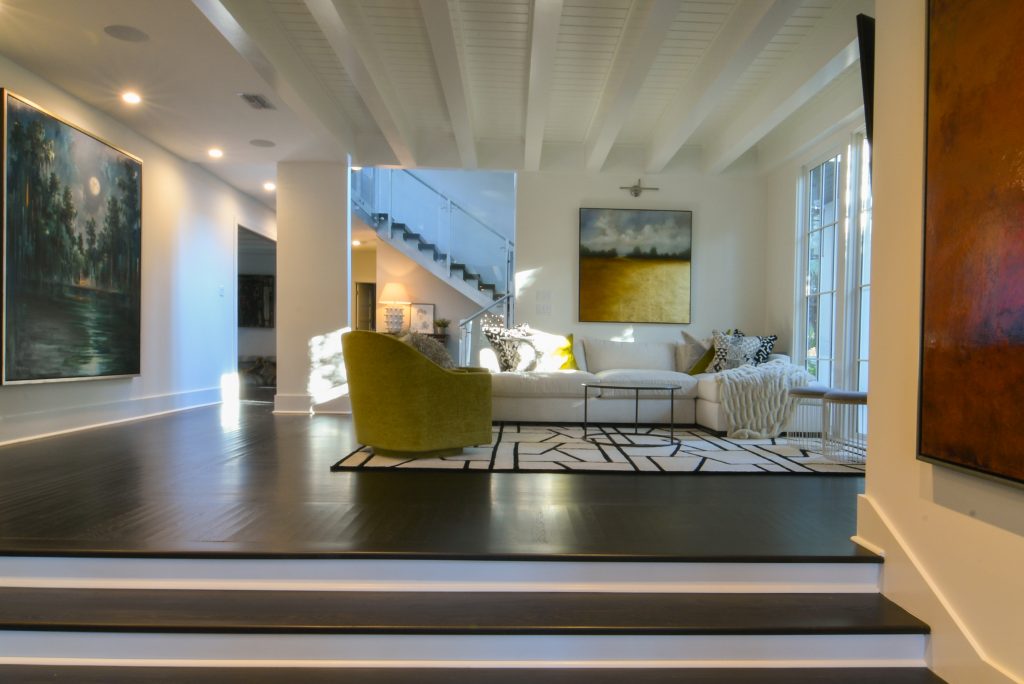 When Beth and Bruce Falkenstein planned to renovate their new contemporary home in downtown Covington, they wanted to honor its eclectic style but didn’t want to end up second-guessing any of their decisions. They’d done that before when they built an Acadian-style home in Covington’s Terra Bella neighborhood five years ago.

So, they took a slow and careful approach. Don’t confuse careful, however, with uninspired. They’re not likely to regret the signature glass-and-aluminum floating staircase, the pool and hot tub whose temperature and lights can be controlled from an app, or the special room where their dogs can hang during parties.

They saved hundreds of images to their accounts on the design and architecture website Houzz before showing them to contractor Jed Duffy, of CJD Construction; design consultant Donna Duffy, of Donna L. Duffy Design; and interior designer Jennifer Frederick, of Jennifer Frederick Design.

The couple also spent lots of time with architects Shiloh Moates and Michael Hunley, the husband-and-wife team behind MSH Architects. Together, they walked through the Covington firm’s plans for that staircase, a two-story addition and an outdoor living space.

Empty-nesters who split their time between Covington and their condo in Sandestin, Florida, the Falkensteins — he’s a banker, she’s a financial planner — wanted the home to have the right flow for entertaining not just their friends, but also their three grown children and their 3-year-old granddaughter. They also envisioned retreat-like spaces.

The hot tub and pool leading to the house are a focal point. Windows in the back of the house are kept bare to make the giant oaks part of the decor.

“We wanted to feel like when we’re here, we’re on vacation, just like we do when we’re going to Florida. I think that was the inspiration for the pool and the way everything was laid out,” Beth Falkenstein said.

The floorplan includes four bedrooms — one serves a gym and play space for their granddaughter — 3½ bathrooms, a combined office and sitting area, and laundry rooms on each floor.

The two-year project transformed the house. What had been a mishmash of styles inside a 1980s structure became sleek spaces that pair classic details with clean lines, modern fixtures and furniture, and a curated collection of local artwork.

“When we started, we said, ‘we’re just going to do a little renovation, maybe add a bathroom,’” Bruce Falkenstein said. Instead, it became quite a project. “We basically have a new house. We took it to the studs, and we ended up replacing most of the studs.” Windows, doors, Sheetrock and more were replaced after leaks were found.

The couple’s renovation journey, as they call it, began when a friend alerted Bruce Falkenstein to a “for sale by owner” sign in the yard. He called immediately, seeing an opportunity to move closer to downtown where he grew up. And he always had admired the house’s unique design and how it is tucked onto its narrow 45-foot lot.

The front of the contemporary house has a curving stone walkway.

He also remembered the property’s original 1930s house from his childhood. It burned, leaving only a fireplace with an antique mantel and patterned-tile hearth. The couple made sure both were kept, in what is now a downstairs guest bedroom, and paired them with a wallpaper whose bird pattern was inspired by John James Audubon.

The deep lot, hidden by an existing lattice gate, and the expansive views of the surrounding trees inspired the couple to sign a purchase agreement the same day they toured the property.

Maximizing those exterior views was part of their vision for the renovation. On the first floor, floor-to-ceiling windows in the main living spaces were kept bare, while custom shades were created to cover only the bottoms of the upstairs bedroom windows.

In the sitting room opposite the light-filled foyer, large plate-glass windows look out to the side yard’s live oaks, giving the space its nickname: the tree room. Sconces with modern branch details give a nod to the oaks, while the hues and imagery in a painting by north shore artist Bernard Mattox complement it.

The dining room is surrounded by windows and art.

There also are views of the trees through the floor-to-ceiling windows and French doors along the rear wall of the addition. It starts three steps down from the den, which is where the original home ended.

Besides adding another 1,500 square feet to the house, the addition also continues its existing contemporary elements. There are the triangular windows tucked just under the eave-less gable roof line. The master suite has the same exposed-beam and tongue-and-groove ceilings seen in the upstairs guest bedrooms, tree room and vaulted-ceiling foyer. The foyer’s exposed ductwork is repeated in the new kitchen.

The addition’s first floor contains a spacious dining area and an adjacent designer kitchen where there’s a focus on entertaining. Its 12-foot by 5-foot center kitchen island has seating for six and features a waterfall-edge countertop of Nuvolato quartzite quarried in Brazil.

Along the opposite wall, two Fisher-Paykel refrigerator-freezers flank the ILVE Majestic stove.

The master bedroom has a wall of windows that face away from the sunrise and overlook the backyard. The balcony rail is made of glass so it doesn’t obscure the view.

In the addition’s second-story, the couple created a retreat for themselves with a luxurious master suite. In the bedroom, windows and doors — they match those in the dining room — open to a balcony, whose glass railing doesn’t obstruct the wooded view.

“I pinch myself half the time because the colors that come through these trees in the evening and the morning are so cool. You sort of feel like you’re in a bird nest,” Beth Falkenstein said.

A copper tub in the master bathroom is another of her favorites in the house. It sits below three square windows and coordinates with the round mirrors’ brass details and the antique Italian Murano glass chandelier selected by Frederick.

The couple purposefully wanted the master suite on the second floor so “as we age, we are forced to be healthy enough to go up and down the steps,” Bruce Falkenstein said.

The glass and aluminum floating staircase is a signature feature of the home. Two commissioned works from north shore artists draw the eye upward through the space: a mixed media piece by Babette Beaullieu, and Joel Blazek’s five wooden discs, which represent the family.

And they are not just any steps. A showpiece of the renovation, the floating stairway “took all of the two years to get this from concept to reality,” he said.

It features glass panels — fabricated by nearby Dependable Glassworks — that are attached to an aluminum base and railings handcrafted by Brett Thibodeaux, who also created a modern side gate and the entrance’s cantilevered roof. The thick ebony-stained stair treads match the rest of the house’s flooring.

Tucked into a corner of the airy entry, the couple wanted the stairway “to be amazing while at the same time not overpowering the space,” Beth Falkenstein said.

Even with all the interior’s beautiful spaces, the couple loves spending outside where the slate patio connects to the new pool and hot tub. One of the home’s many smart features, it can be started from an app while the couple dines in one of downtown Covington’s many restaurants, to which they’ll often walk.

Considering every detail and incorporating special features into the renovation became part of the Falkensteins’ mission to give the house what they believe it deserved.

“When you get into it, you think ‘if you’re going to do it, you might as well do it right,’” Bruce said. “We had fun with it at the end of the day.”